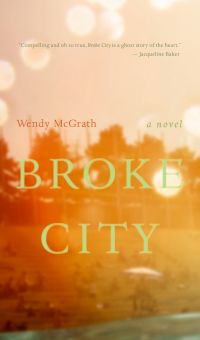 Budding with creativity that her working-class parents do not understand, Christine questions her parents' fraught relationship, with alcoholism and implicit violence bubbling just under the surface of their marriage. Her insight turns beyond her family to her neighbourhood, nicknamed Packingland, a community built on meat-packing plants and abattoirs, on death.

Written with tight lyricism, Broke City is a brimming working-class gothic novel that reveals Christine's deepening knowledge of the adult world around her and of her own complicated place in that world.

Wendy McGrath’s most recent novel Broke City is the final book in her Santa Rosa Trilogy. Previous novels in the series are Santa Rosa and North East. Her most recent book of poetry, A Revision of Forward, was released in Fall 2015. McGrath works in multiple genres. BOX (CD) 2017 is an adaptation of her long poem into spoken word/experimental jazz/noise by QUARTO & SOUND. MOVEMENT 1 from that CD was nominated for a 2018 Edmonton Music Award (Jazz Recording of the Year). She recently completed a collaborative manuscript of poems inspired by the photography of Danny Miles, drummer for July Talk and Tongue Helmet. Her poetry, fiction, and non-fiction has been widely published.