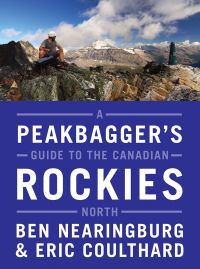 A full-colour, comprehensive scrambling guide to the increasingly popular mountain landscapes located in the northwestern reaches of the Rocky Mountains.

The authors describe over 100 routes to peaks of all sizes and difficulties, from simple alpine hikes on well-defined trails, to challenging scrambles and focused alpine climbs. Routes are included for peaks in all four corners of Jasper National Park, Willmore Wilderness Park and Mount Robson Provincial Park as well as peaks near the towns of Cadomin, Hinton, Grande Cache and Valemount. Each summit has well-described ascent and descent routes supported by stunning photographs of the majestic wilderness of the northern Rockies. Described routes range from short single-day trips to more aggressive multi-day expeditions.

A Peakbagger's Guide to the Canadian Rockies has something for everyone looking to enjoy the splendour of Canada's mountains.

Ben Nearingburg is a research scientist/instructor by day, but at most other times he roams the hills of the Canadian Rockies and Columbia ranges. Coming from a background of distance hiking and indoor climbing, Ben has been drawn to the triad of good exercise, fabulous views and great company that mountainous pursuits provide. In 2016 Ben started down the road of becoming a certified hiking guide, to share his passion of the mountains both on and off the written page. He lives in Edmonton, Alberta.

Eric Coulthard is a computer scientist. He is the founder and developer of summitsearch.org, a mountain community site with an encyclopedia, trip reports, a forum and over 15,000 mountain photos. When it comes to mountain trips, Eric loves exploring. Many of his top treks are exploratory jaunts with little or no beta. The ability to draw routes and use the photos on summitsearch.org helps immensely in planning his explorations. One of Eric's goals is to get a photo of every named peak in the Canadian Rockies on summitsearch.org. He also hopes to visit every icefield in the Rockies. Outside of work and mountains, Eric is a devoted husband and father. He lives in Edmonton, Alberta.