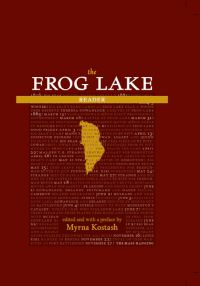 Nonfiction author Myrna Kostash merges the past and the present in The Frog Lake Reader, which offers a multi-layered perspective on the tragic events surrounding the Frog Lake Massacre of 1885. By bringing together eyewitness accounts and journal excerpts, memoirs and contemporary fiction, and excerpts from interivews with historians, Kostash provides a panoramic view of a tragedy often overshadowed by Louis Riel's rebellion of the same year. The history is contentious and its interpretation unresolved, but The Frog Lake Reader, with its broad survey of vital historical accounts and points of view, offers the most comprehensive and informative narrative on the Frog Lake Massacre to date.

Born and raised in Edmonton, Alberta, award-winning nonfiction writer Myrna Kostash is the author of twelve books, including All of Baba’s Children and The Doomed Bridegroom: A Memoir. In addition to contributing articles to various magazines, such as Geist, Canadian Geographic, and the Literary Review of Canada, Kostash has written radio documentaries and theatre playscripts. Her creative nonfiction has appeared in numerous Canadian and international anthologies, such as The Thinking Heart: Best Canadian Essays, Slice Me Some Truth: An Anthology of Canadian Creative Nonfiction, Desire: Women Write About Wanting, Literatura na S´wiecie (Warsaw), and Mostovi,/i> (Belgrade).A founder of the Creative Nonfiction Collective, Kostash has taught creative writing workshops across Canada and in the US. She has served on several award juries, including those of the Governor General’s Awards, the CBC Creative Nonfiction competition, and the Writers’ Trust Non-Fiction Prize. In 2008 the Writers Guild of Alberta presented her with the Golden Pen Award for lifetime achievement, and in 2009 she was inducted into the City of Edmonton’s Arts and Culture Hall of Fame. In 2010 she received the Writers Trust of Canada Matt Cohen Award for A Writing Life. Myrna Kostash's newest book, The Seven Oaks Reader, is a spiritual sequel to 2009's The Frog Lake Reader.