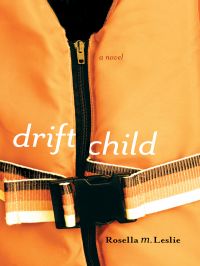 Emma Phillips is a 35-year-old divorcee with an undemanding job, a rustic old house, and a friend who provides all the benefits she needs. She's comfortable, complacent, and accustomed to getting her own way – until she is shipwrecked during a violent storm in the Queen Charlotte Strait and forced to assume temporary guardianship of three traumatized, newly orphaned children. From the author of The Goat Lady's Daughter comes a moving new story, set against the rugged backdrop of coastal British Columbia, of a woman determined to manage her own destiny, and a child whose own strong nature defies those who would take control of her fate.

Rosella Leslie was born in Edmonton, Alberta, and grew up in small towns throughout Alberta and British Columbia. She worked in Merritt and Vancouver, before moving in 1980 to a floathouse at Clowhom Falls on Salmon Inlet to focus on her writing career. In 1991, Leslie moved with her husband and son to Sechelt. Leslie’s hobbies include gardening, pulling up crab traps, and early morning mountain walks.She is also the author of The Sunshine Coast: A Place to Be, and has co-authored Bright Seas, Pioneer Spirits: The Sunshine Coast, and Sea Silver: Inside British Columbia’s Salmon-Farming Industry with Betty Keller. Leslie is also one of the authors of Stain Upon the Sea: West Coast Salmon Fishing, which won The Roderick Haig-Brown Regional Prize at the 2005 British Columbia Book Awards. Her first solo novel, The Goat Lady's Daughter, was published in the Fall of 2006, and her second novel, Drift Child, was released in September 2010, and her third novel, The Federov Legacy was published in April 2013. In 2014 she published The Cougar Lady: Legendary Trapper of Sechelt Inlet.