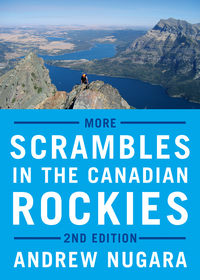 The second edition of More Scrambles in the Canadian Rockies contains 49 new routes, in addition to the 65 of the first edition, along with a large collection of full-colour photos and maps. The regions of Waterton, The Castle and Kananaskis are covered comprehensively. Between this edition and Alan Kane’s Scrambles in the Canadian Rockies, all of the major, named peaks in Waterton National Park are outlined. The Castle too is thoroughly covered, including a handful of terrific ascents around Middle Kootenay Pass and a new section for multi-peak baggers titled The Ultimate High-Level Ridgewalks. Several scrambles in other areas (Crowsnest, Banff, Highway 93 North and Yoho) are likewise new to this edition.

Andrew Nugara outlines several different routes to each summit and includes alternative and easier descents. Encompassing a range of levels of difficulty, the second edition of More Scrambles in the Canadian Rockies will appeal to anyone familiar with the first edition of this book and Alan Kane’s best-selling, classic guidebook, as well as to hikers looking for a more challenging route to the top of a mountain.

In addition to route descriptions, the book contains general information on scrambling, suggested trips for specific conditions, details about each specific area, and single-day, multi-peak trips.

Andrew Nugara was born in Rugby, England, and moved to Canada in 1979. He earned bachelor degrees in classical guitar performance and in education and presently teaches high school physics, mathematics and music. With his brother, Mark, Andrew started to hike and scramble up mountains in 2001. Shortly after, Andrew and Mark began to pursue other forms of mountain recreation such as alpine climbing, technical climbing and ice climbing. Scrambling, however, has always remained the primary focus for the brothers. In subsequent years, snowshoeing took on a more prominent role in Andrew and Mark’s winter travels, yielding two books in that field. Since 2001 Andrew has completed over 700 mountain ascents. Along with the new edition of More Scrambles in the Canadian Rockies, Andrew is also the author of Snowshoeing in the Canadian Rockies (RMB, 2011) and A Beginner’s Guide to Snowshoeing in the Canadian Rockies (RMB, 2012). He lives in Calgary, Alberta.