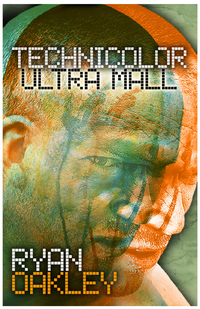 In the commodified future the consequences of a failing society are brought to bear upon one man’s ambition and his attempt to escape his own socio-economic hell.

The world’s ecosystems have been destroyed by genetic pollution and cities have evolved into mega malls.

Budgie is a knife wielding, brass knuckled young man from the impoverished and brutal red section of Toronto’s T-Dot Center. When his best friend is murdered and Budgie falls in love with the woman responsible, he learns that there’s more to life than drugs, blood or money. To escape his past he must give up everything and everyone he knows and sell his perceptions to an enigmatic and dangerous gang leader.

Fighting for survival and unwittingly involved in a scheme that only he can stop, Budgie must ask himself: Does he want to?

Technicolor Ultra Mall is an ultra-violent science fiction dystopic novel about the value of being human in a completely commodified world.

Ryan Oakley: was raised in a small town and discovered at an early age that he was drawn to the bright lights, white noise and gaudy trappings of the big city. In the din of the city he lives his life, experiencing it all; using his experiences to further his writing, he says, "I've always enjoyed writing. I don’t know when I started doing it — I was a little kid — and I've always tried to make the time to do it."

Although Oakley never completed a high school education, he admits that he's not "a particularly stupid man". He works as a bartender, waiter and dishwasher, as needs be, and is fast becoming known as Toronto’s most notorious dandy and renowned flaneur.