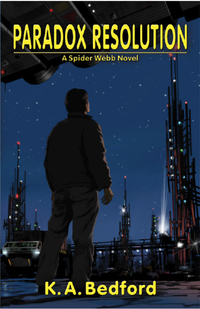 Aloysius “Spider” Webb fixes time machines for a living. He hates his job; he hates his life, and hates time travel even more. He’s a hard working ­Australian bloke — a good man in a bad ­situation who is willing to do almost anything to regain his self-respect and the affection of his nearly ­ex-wife, Molly; a mad sculptress on her way to international fame and fortune.

Spider’s life and his world are changing. ­After quitting the Western Australian Police Service, Spider studied to become a time ­machine repair ­mechanic, eking out a sparse ­living fixing broken down machines. But the ­repair business isn’t what it used to be. Once, time machines were as big as cars; but now they’re smaller and compact, portable, and cost too much to get fixed so it’s easier for people to simply buy a new one. Times are tough and there is no end in sight.

Meanwhile, Spider’s new boss at the Time ­Machines Repaired While-U-Wait franchise needs help: his ­secretly built, totally ­illegal, radically overclocked, hotrod time ­machine has been stolen, and Spider is the right man to get it back before it falls into the wrong hands, or worse inadvertently destroys the entire universe.

Spider’s journey begins with a simple favor to help his almost ex-wife, Molly, and moves to the icy wastes of the far, far future.

Surprise and shock are the only ­constants in ­Spider’s life; why should this job be any ­different?

About K. A. Bedford

K. A. Bedford was born in Fremantle, Western Australia, in 1963. He attended Curtin and Murdoch Universities, and studied Writing, Theatre, and Philosophy