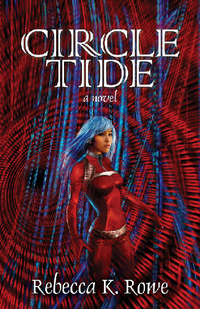 A tale of two unlikely companions cast together in a mystery, and a mission to save the planet.

Noah of Domus Aqua, an environmentalist and the son of extreme wealth, is a fugitive suspected in the high profile murder of his long-time friend and mentor Senator Mari Ortega.

Promising his dying friend that he'll deliver a highly confidential datasphere to a trusted government official, Noah plunges himself into the Underground, a gritty subterranean world of knife-wielding monks, a crew of oddball hackers and a smart intelligence bent on his destruction, as he avoids virtual detection and his arrest.

Enter Rika Musashi Grant, a street-smart data thief. Heavily in debt from getting mind enhancements that fail, Rika is given one more chance to prove herself and right past wrongs -- by stealing Noah's datasphere.

Joined by circumstance and mutual disdain, the two quickly realize they must join forces to survive.

Set against a backdrop of Los Angeles in 2051, the unlikely duo must travel from the deepest catacombs to the most exclusive rooftop gardens; from LA's over-crowded refugee camps through to the virtual world of Novus Orbis, as they seek to find the clues they need to prove their innocence, find a killer, and stop the eco-disaster known as CircleTide from destroying the planet!

Rebecca K. Rowe is a freelance writer, published author and member of the National Space Society and The Mars Society. She has M.A.'s in Journalism and International Relations. Her short work / poetry has been published in Polyphony, Ascent Magazine, and Sol Magazine. Rebecca is a graduate of the Clarion Science Fiction & Fantasy Writers' Workshop.