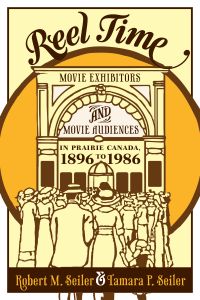 In this authoritative work, Seiler and Seiler argues that the establishment and development of moviegoing and movie exhibition in Prairie Canada is best understood in the context of changing late-nineteenth-century and early-twentieth-century social, economic, and technological developments. From the first entrepreneurs who attempted to lure customers in to movie exhibition halls, to the digital revolution and its impact on moviegoing, Reel Time highlights the pivotal role of amusement venues in shaping the leisure activities of working- and middle-class people across North America.
As marketing efforts, the lavish interiors of the movie palace and the romantic view of the local movie theatre concealed a competitive environment in which producers, exhibitors, and distributors tried to monopolize the industry and drive their rivals out of business. The pitched battles and power struggles between national movie theatre chains took place at the same time that movie exhibitors launched campaigns to reassure moviegoers that theatres were no longer the “unclean and immoral places of amusement” of yesteryear. Under the leadership of impresarios, the movie theatre rose up from these attacks to become an important social and cultural centre – one deemed “suitable for women and children.”
An innovative examination of moviegoing as a social practice and movie exhibition as a commercial enterprise, Reel Time depicts how the industry shaped the development of the Canadian Prairie West and propelled the region into the modern era.

Robert M. Seiler is associate professor emeritus in communication and culture at the University of Calgary.

Tamara P. Seiler is professor emeritus of Canadian studies at the University of Calgary. Reel Time is their second joint publication.