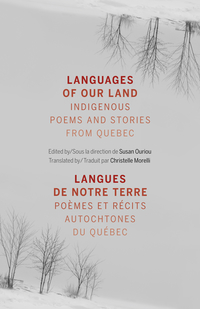 Languages of Our Land/Langues de notre terre is a collection of poems and stories by twelve emerging and established Indigenous writers living in Quebec and writing in French. These writers all participated in either the Aboriginal Emerging Writers Program (now the Indigenous Writing Program) at the Banff Centre, or the francophone chapter of this program, Programme à l'intention d'écrivains autochtones en début de carrière, in Quebec. The writing within Languages is presented in English translation alongside the French original and interlaced with words in the writers’ Indigenous languages—Innu-aimun, Wendat, Cree, and Algonquin—glossed at the end of the anthology.